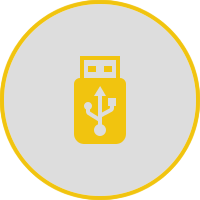 As useful as you think your USB pen-drive / flash-drive / external hard-drive might be, they do present a number of major security risks including loss of data, theft of data, file corruption, malware and breaches of GDPR laws. In this section we will refer to all USB portable media as "pendrives".

The following information describes these issues and shows you how you can reduce the risks by binning your pendrive and switching to the cloud.